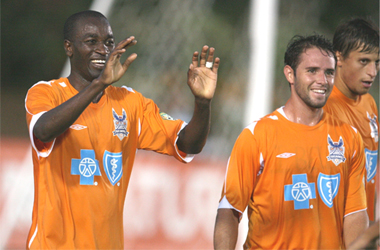 I’ll never forget the day when my father brought his boss to the Fort Lauderdale Strikers home game against the San Diego Soccers. The year was 1982 and the league was the NASL. The Strikers were a good team and would as always end the season fighting in the playoffs. But on this one night, a team that included Nene Cubillias, Ray Hudson, Thomas Rongen and Brian Kidd were badly outclassed and on the wrong end of a 7-1 scoreline.

The APSL Strikers were always one of the better teams in the league, and under Thomas Rongen they had some poor matches but nothing coming close to what happened last night to Miami FC. Even for what was borderline semi-professional soccer, Fort Lauderdale drew 3,000-4,000 for each game. Why? The team was good for the league they were in and they had the right name.

For most of its existence, the Fusion were swimming against the tide. Poor player decisions, bad marketing and a horrible manager in Ivo Wortman. Interestingly enough the same organization that had sacked Cacho Cordoba barely midway through the first MLS season, allowed Wortmann parts of three seasons to work his magic before he was finally shown the door.

Wortmann managed to keep his job even after an embarrassing 6-1 loss at Spartan Stadium against the equally poor San Jose Clash. Somehow, after that match the Fusion recovered and meekly slipped into the MLS playoffs. Not that the club had accomplished anything, because after all they were competing with the likes of the Metrostars under Bora and the Revs under Walter Zenga for that final playoff spot.

The Fusion righted the ship under Ray Hudson, but after the Fusion disappeared, Miami FC owned by Traffic Sports came to town. The hopes were high, because Traffic is massive in Latin America, and for year one they brought the one and only Romario to South Florida. Romario instantly made Miami FC one of the best teams in the USL First Division, but since the team has been a poor compilation of journeymen players, without any real core.

The club has produced some nice talents and passed through some others like Eric Brunner and Josh Saunders. But the bottom line is Miami FC has failed to capture this markets attention and imagination the way the Strikers and even to a certain extent the Fusion have.

Last night, may have been the death knell unless serious changes, or a re-branding effort is undertaken. Miami FC is already a damaged brand, but losing 9-0 makes a damaged brand, one you pull off the store shelves permanently. You don’t fold the company, but you re-brand and market to another audience. Traffic Sports for all their success in other football related ventures is failing with Miami FC.

Aaron Davidson, the team President is one of the most creative and innovative minds in the American game. My hope is that he is allowed to make the changes he feels are necessary to right this ship before it takes on any more water.  The Blues have scored twice but conceded 24 goals in the last month. This is despite waiving local hero Diego Serna and signing Brazilian World Cup veteran Junior Baiano along with USYNT standout Gale, and Tristan Bowen, once among the most promising young players in MLS. Nelson Pizzaro, a local Broward County product was also signed, but he has yet to show any quality in a match.

For more discussion of Miami FC’s woes tune in to Mad About Futbol’s next podcast.

Also for last night’s postmatch summary, please check out this piece by Adam Beasley of the Miami Herald.

Other thoughts from the Ultras President and Miami Soccer Fan’s Pieter Brown.

Miami Soccer Examiner’s Juan Arango has this sobering look at the team.