Guus Hiddink to become the coach of the Turkish National Team. 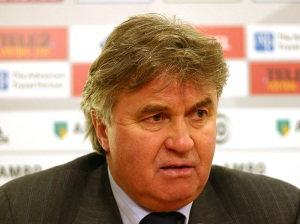 It has been confirmed, through various sources, that the Turkish Football Federation has agreed in principle to hire Guus Hiddink as the head coach of the Turkish national team.  Hiddink, who is still under contract with the Russian Football Federation until June, will sign a contract that will have him begin his duties as head coach on August 1, 2010.  He succeeds Fatih Terim, who resigned the post in October after the loss in the World Cup 2010 qualifying campaign to Belgium.  After meeting with Turkish Football Federation president Mahmut Özgener and TFF vice-president Lutfi Arıboğan in Amsterdam, a contract was agreed upon with the 63-year old.  The contract is said to be a four year contract, guaranteeing that Hiddink will be the coach through at least the Euro 2012 tournament, with optional two more years.  Hiddink’s assistants are to be former Fenerbahçe great Oğuz Çetin and former Beşiktaş and Fenerbahçe goalkeeper Engin İpekoğlu.

Hiddink’s has been considered one of the top coaches in the world due to his success at club level, but mostly at international level.  He had won the treble of Dutch league, cup, and European Cup with PSV Eindhoven in 1988.  While coach of PSV Eindhoven, he had won three Dutch league titles.  His coaching stink with the Netherlands saw the Dutch make it to the World Cup semi-finals in 1998.  He became a South Korean national hero, and an honorary citizen of South Korea, after leading the Korean national team to a fourth place finish in the 2002 World Cup.  After leading the Australian national team to the second round in the 2006 World Cup, he would lead Russia to an appearance in the Euro 2008 semi-finals.  During his tenure with the Russian national team, he would lead Chelsea to an English FA Cup in 2009.  After the defeat to Slovenia in the 2010 World Cup qualifying playoff, it was confirmed that he would not extend his contract with the Russian Football Union after it expires in June 2010.

Hiddink has experience in Turkey in his career.  In the 1990-1991 season, he was the head coach of Fenerbahçe, before being let go after that season.  While Hiddink may have had success everywhere he’s been, this job will have him going into a steaming cauldron.  He will be under pressure to succeed right away, and it will be considered outright failure should Turkey not qualify for Euro 2012.  Hiddink will have talented players to work with, as evidenced through Turkey’s run in Euro 2008.  The question will be whether he can combine the talent he will have, and put in a team concept that ends the reputation of the Turkish national team as perhaps one of the most erratic national teams on the face of God’s green earth (as mentioned by me on the previous Turkish Football Weekly podcast).  He will also have a deep talent pool to work with, as he can potentially select not only Turkish players in Turkey, but also Turkish players that are eligible to play for the Turkish national team in countries such as Germany, the Netherlands, Belgium, Austria, and France among others.  Hiddink is a more than capable coach, but he’ll be under the microscope right away.  The press in Turkey can become nasty with criticisms should the national team not succeed, so Hiddink will have to deal with that.  With the Hiddink era set to begin in August, it will be interesting to see what Hiddink can be able to do with a team that seems to be on the brink of great success, but can’t seem to find consistency to achieve such success.